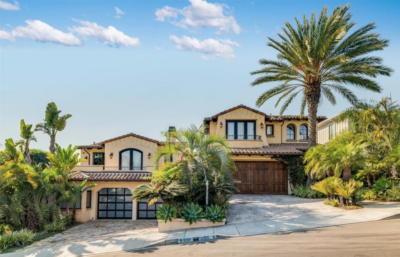 About a mile from the water in Manhattan Beach, a two-home, double-lot compound once owned by U.S. soccer star Landon Donovan is up for grabs at $6.75 million.

The longtime L.A. Galaxy captain owned the place for six years before selling it for $4.2 million in 2012, The Times previously reported.

A pair of Mediterranean-style homes — one 3,400 square feet, one 2,400 square feet — anchor the property. Out back, an entertainer’s backyard holds a resort-style pool with two spas and two waterfalls. 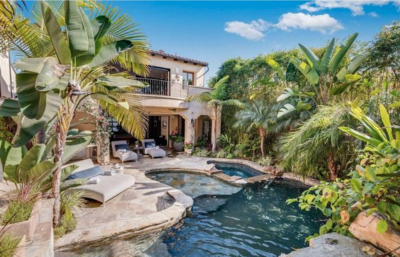 The bigger house feels a bit more traditional with an open floor plan that combines a chef’s kitchen, breakfast nook and living room. Floors of reclaimed barn wood and French terracotta tile draw the eye throughout the interior.

A chandelier-topped sweeping staircase accesses the second story, where a master suite with a corner fireplace expands to a private balcony.

The smaller guesthouse is all about the amenities. Nestled right up against the pool, it boasts a covered flagstone patio and an indoor-outdoor billiards room with a fireplace. Other highlights include a gym, spa, sauna, movie theater and a massive wet bar with a wall of wood under coved ceilings. A checkered-tile terrace hangs off the top level.

Donovan, who is from Southern California, is considered one of the greatest U.S. soccer players of all-time. He won a record six MLS Cups between his time with the San Jose Earthquakes and L.A. Galaxy and is also the U.S. men’s national team’s all-time leader in assists. He currently serves as manager and co-owner of San Diego Loyal in the USL Championship league.

All information subject to change. All imagery is representational and does not depict specific building, views or future architectural, community or amenity details. All services, pricing, square footage and bed/bath counts subject to change. Not an offer or solicitation to sell real property.